Long before we discovered that words can be used to trick us, the Bible clearly demonstrated how words were used to deceive: in fact, in the first questions and answers ever recorded in the Bible. This conversation went as follows:

‘And he [Satan] said to the woman [Eve], “Can it really be that God has said, ‘You shall not eat from every tree of the garden?’”
And the woman said to the serpent, “We may eat the fruit from the trees of the garden, except the fruit from the tree which is in the middle of the garden. God has said, ‘You shall not eat of it, neither shall you touch it, lest you die.’
But the serpent said to the woman, “You shall not surely die. For God knows that in the day you eat of it your eyes will be opened, and you will be like God, knowing the difference between good and evil and blessing and calamity.”’
Genesis 3:1-5, the Bible, Amplified Version

It’s the oldest question, and the most fundamental doubt, in the world:
Can it really be that God has said…?

Casting doubt on the character and intentions of God, twisting the truth, making an alternative version of ‘truth’ much more appealing – this can all be seen in this first deception. It’s precisely what the Government of Err planned to do in The Rumour Mill – aided by the wicked Meddlers (who in turn have their own agenda entirely!).

‘If the ideas were subtle enough, with just enough truth twisted by exaggeration, with a bit of spice and interest added for good measure, people would believe anything!’
[The Rumour Mill]

So, the question is, what will stand against lies, and defeat the poisonous slander of Aletheia’s enemies? Should the people of Aletheia sling counter-accusations? Fight back? Vehemently defend their reputation and their honour? Sue them for slander or libel? Preach? Protest? Destroy?
What would you do?
Would you…

In the fight against the Rumour Mill – the horrible, terrifying home of the Meddlers – a weapon is woven, so powerful that the hordes of evil, who are used by human beings to generate lies and slander against the people who stand for Bible Truth, are utterly destroyed. Picture the shrieking hosts of Meddlers who occupy a ghastly, ghostly ruin. The around is filled with the poison that they thrive on; it’s their food and drink and source of strength. They are drunk with wicked lies and deceit. But descending on their headquarters…

‘Through the poisonous white vapour, a layer of spectacular beauty was slowly enclosing the Meddlers, glimmering and shining like a thousand radiant diamonds. Hoarse cries of horror and consternation rang through the ranks. Their curses and howls and shrieks and raucous cries rang far and wide…
They were gasping for air, slowing suffocating under the covering of patient love and prayer and supplication that they could not possibly survive beneath.
Their air was poison; they had no ability to breathe the pure fragrance of love.’
[The Rumour Mill] 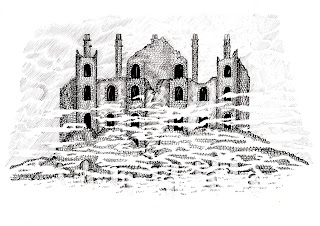 Can truth defeat lies? On a day-to-day level, when individual disputes, and individual lives, are affected and even ruined by deceit and lies, the truth does not always win. There have been tragic miscarriages of justice because truth did not prevail; and ruined lives and reputations because a lie won.

But ultimately Truth will win the day and destroy all empty illusions and lies. Because The Truth was embodied in a Person who created, defined, and explained it. The answer rests in the character of God (as it did in the Garden of Eden – Adam and Eve would not have made the wrong choice if they had trusted what God said); it is finally revealed in the Person who came to show us what God is really like.

More of this in the next blog:
What, or Who, is Truth?
Posted by Eunice Wilkie at 07:08