THE CONSEQUENCE OF COMPROMISE

“Tolerance is the virtue of the man without convictions.”
G.K. Chesterton
As we have previously seen, in the town of Wishy-Washy, in the fascinating land of Err, things are definitely wishy-washy. In a supreme effort to tolerate every point of view, the townsfolk don’t disagree about anything, or dare to hold that anything is definitely true – because then another thing must be necessarily false, which wouldn’t be a very tolerant thing to think at all now, would it? The people who live there have adjusted to faded colours and vaguely foggy ideas; they no longer notice them. But it’s really not a convenient place to be if you get lost. And, as Jack and Timmy and Hezekiah are exactly that, they must look for someone to help them with definite directions…

‘Jack approached a lady who was walking close by and seemed to know where she was going. “Excuse me, is this the way to Apathy Road?” he asked.
“Oh, I dare say it is if you want it to be,” the lady said.
“What does that mean?” asked Timmy. But the lady had passed by and was quickly lost to sight through the mist and rain.
“Excuse me,” Hezekiah tried to stop a man who was hurrying on his way, no doubt anxious to get home and out of the damp. “What is the way back to the main Apathy Road?”
“All roads will lead there if you follow them for long enough,” he said vaguely. And then he politely excused himself and hurried on.
“Doesn’t anyone around here give a straight answer?” demanded Timmy. “Hey you!” he called to a young man who was rushing by under an umbrella. “Can you tell us the way to Apathy Road?”
“Keep going straight ahead and you might reach Compromise,” the young man called back. “You never know, they might tell you the way!”
“Honestly!” said Timmy. “What’s wrong with the people around here?”
“I don’t think they can give a straight answer,” said Jack. “Most of the people at the Fair couldn’t either. I think that’s what happens when you’re…well, wishy-washy and don’t really know what to believe.”’

Without clear directions, the three boys continue to walk towards Compromise.

‘The mist grew even thicker, the rain continued to fall, and the dull daylight of late afternoon began to fade. There seemed nothing left to do but to keep walking somewhere even as the crowd around them thinned and vanished… Jack and Hezekiah and Timmy were left alone in a land of marshland and trees.
And ahead, for good or ill, lay Compromise…’ 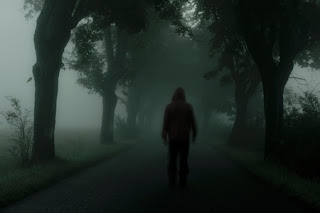 Perhaps unsurprisingly, road signs to Compromise are not very clear. Some might suggest one way, but it’s possible there’s a reasonable alternative route too; a third way might have some merit, and there’s a fourth which has never been explored but shouldn’t be completely discounted… Darkness falls as night approaches, and with no money, and no food, and no clear directions, the boys must make a dark forest their home for the night.

‘Jack turned slowly and searched the forbidding forest behind them. He had heard a snigger; a horrible, nasty laugh of something that was out there. He wished he had a light, any light at all. But did he really want to see what it would reveal? Were they really at the mercy of cruel and shadowy Snares that might take them captive?...’

Compromise can be a good thing. In life, unless we are utterly intolerable people, we will very often give a little ground to others. It can be a good, kind, thoughtful, practical thing to do in order to assist those around us.

But there are matters on which it is impossible to compromise without entering dangerous territory: in particular, essential Bible Truth. I’m not talking about what Christians should wear or eat or look like; I mean the fundamental truths of the Bible – about the character of God, the way of salvation, the person and work of the Lord Jesus Christ. About such, there is no ground to give, and any drifting towards tolerance of alternative ideas inevitably leads to greater and greater compromise and somewhere down the line to grave danger.

For the three boys, lost in the night, the consequences of travelling towards Compromise will be dire indeed.

TO BE CONTINUED - NEXT BLOG: HOLLOW CARROTS
Posted by Eunice Wilkie at 12:11