I think there is probably a fundamental misunderstanding about freedom in Christianity. The secular world at large obsesses about the protection of an individual’s freedom. This usually means the freedom to express myself by whatever behaviour, and in whatever manner, I please, limited only by whatever boundaries are imposed by the current law of the land in which I live. There is not much that is new in this notion of individual freedom. In fact, there is, perhaps, some resemblance to the book of Judges in the Bible, at least 1000 BC, which can be summed up in these words:

‘Everyone did what was right in his own eyes.’
Judges 21:25, THE BIBLE

Now, someone might say, ‘And what is so wrong with that? Surely freedom to please myself is essential to, even the very nature of, happiness. And isn’t the very essence of freedom to do precisely what I please, so long as it isn’t harming anyone else?’ And yet, there is a strange paradox here. On the one hand this appears to be the embodiment of freedom, but living without moral boundaries, enjoying satisfying whatever desires appeal to me, leads me inexorably into the slavery of sin – because I have ignored God’s law and the boundaries He has set. The Lord Jesus Himself said,

‘Most assuredly, I say to you, whoever commits sin
is a slave of sin.’
John 8:34, THE BIBLE 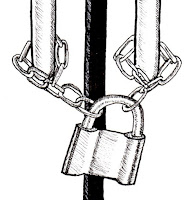 This, then, is the quandary:
that by coveting freedom, by throwing overboard boundaries and living according to my own ‘code of conduct’, I have broken the law of God, and have actually become a slave of sin.

This attempt to invent our own freedom and happiness goes back further than the book of Judges – right to the very dawn of creation, to the Garden of Eden. In Mere Christianity, C. S. Lewis expresses it like this,

“What Satan put into the heads of our remote ancestors was the idea that they could ‘be like gods’—could set up on their own as if they had created themselves—be their own masters—invent some sort of happiness for themselves outside God, apart from God. And out of that hopeless attempt has come nearly all that we call human history—money, poverty, ambition, war, prostitution, classes, empires, slavery—the long terrible story of man trying to find something other than God which will make him happy.
God cannot give us a happiness and peace apart from Himself, because it is not there. There is no such thing.”

In our adventure story, Timmy Trial has learned the cost of going his own way against God. Instead of enjoying the ultimate freedom to benefit from the land of Err and shape his own destiny, he is taken captive by the Snares that represent sin. But, despite the fact that his friends struggled to find him, he is miraculously set free!

‘“Think about the truth of Redemption. You know that when the Lord Jesus died, He paid the ransom for the sins of the whole world. But not everyone will be saved. Just as Timmy did recently, people have to choose to accept the payment that the Lord Jesus made on their behalf, and then they are set free from paying the penalty for their sins themselves… Redemption is being purchased by God instead of being owned by sin; being set free from sin to belong to God instead… When Timmy cried out to God to save him and set him free from the Snares of sin that had a hold of him, then they no longer had any authority over him.”

Where, then, is the greatest personal freedom to be found?

TO BE CONTINUED - NEXT BLOG: ABOUT WORDS
Posted by Eunice Wilkie at 03:45