I love delving into the strange towns and locations the curious land of Err has to offer. There are so many things to discover there! You see, the physical characteristics of locations in the land of Err, take on the character of the people – and the results can be interesting, dangerous, and downright peculiar. 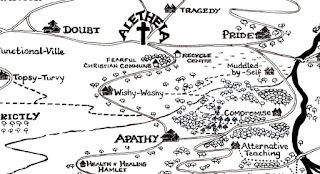 In the town of Wishy-Washy, things are…well, rather wishy-washy. The town is misty and hazy, and very often damp fog clouds the air and distorts the view. On the best days it’s still more-or-less colourless – as if an artist has put too much water in the paint and washed all but the faintest hues of colour away. But, for all that, it is generally a peaceful, agreeable kind of place, even if the sun seldom breaks through the cloud. You see, nobody is very clear about anything, and if you don’t hold a firm opinion on, well, anything at all, there’s really nothing left to argue about, is there? The worst criticism levelled against it is that the propensity to be agreeable about even the most ridiculous notions can make you seem rather stupid.

When Timmy Trial goes his own way and enters the land of Err, the other children – Jack Merryweather and others from the city of Aletheia – go after him. The first town they arrive at is Wishy-Washy, and the town has a fair in progress. Jack, an ordinary schoolboy, tries to understand this different world…

‘“Why is everything so washed out around here?” asked Jack…
“Well,” said Mr Weighty, “it’s really because people have watered down everything. There are Christians here who have watered down the Truth of the Bible or just chosen the bits they like and so have become all watery and wishy-washy about what they believe. And there are people who aren’t Christians who don’t mind some bits of the Bible but sadly have never grasped the whole Truth and come to the Lord Jesus to be saved. That’s why everything has become misty and unclear, because that’s what these people are…”…
It was an intriguing idea: that places became like the people who lived there. Jack wondered what his own village would look like if it imitated what the people were on the inside…’

But there are dangers lurking in the shadows,
even in seemingly harmless, agreeable Wishy-Washy. Once people no longer hold the Truth, there is a vacancy for ‘alternative’ versions of ‘truth’ – which are ultimately deception and lies. Small changes to essential Truth, lead to greater and greater deceptions – as Jack and his new friend Hezekiah find when they become lost in the tangled stalls of Wishy-Washy Fair. They reach the shady outskirts, and hide and listen to Wander Palm’s prophecies to poor Timmy Trial…

‘Jack had never seen someone trying to tell the future before… The lady was examining Timmy’s head as if he was being checked for head lice when there was an outbreak at school. She was telling him that he would one day grow very tall and strong and might even be a great man in Err. How she got all that through Timmy’s untidy, uncombed and probably even unwashed hair was maybe the mystery bit of Wander Palm’s Prophecies…’

The prophecies about Timmy Trial are everything he wants to hear about himself, his prospects, his future – all his hopes are confirmed by Wander Palm. But there is great danger here. The territory has changed, from solid Bible Truth, to half-true niceties, to agreeable imagination. In the void which should only be filled by the Word of God, there is room for all kind of imaginings, even disguised as modern prophecy and given a label from the Bible.

We are constantly in danger of treading these shifting sands.
We should beware of any specific ‘prophecies’ – verses, messages, dreams, circumstances – that we interpret according to our own desires. Our blessings are spiritual, not material (Ephesians 1:3), (although we know God can bless people with possessions to be used in His service). Beware of any ‘special revelation’ that satisfies your personal ambitions, makes you more content on earth, and is not ultimately equipping you for Heaven:
God is always acting for eternity,
and His blessings to us will reflect this.

‘“Will I be rich?” asked Timmy.
“You have gold prospects,” the lady said soothingly in her mesmerising voice…’

Jack had suddenly had enough. “What rot!” he said to Hezekiah…
The lady’s head snapped around… “Who’s there?” she said sternly as if she was talking to something invisible… 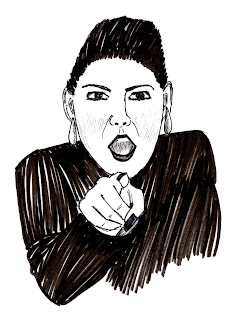 “A spirit from the future is here,” Jack droned in a strange, unearthly voice…“Timmy Trial must leave at once!”…
The lady’s face went very white, and then very red. Timmy seemed utterly bereft of speech…he got suddenly from his chair and staggered slightly as he stood.
The lady stood too. “I don’t think it’s anything to worry about,” she said to Timmy, but Jack heard the awful uncertainty in her voice. “This has never happened before. It might be a special revelation…”
Jack hadn’t thought of what to do next; he was utterly astonished that his pretence had been remotely believable. He decided to continue…’

The scene has its ludicrous moments, and there are further consequences in the story, but the danger of false teaching and prophecy is real enough. If we don’t saturate ourselves in the truth of the Bible, we will fill the void with other matter instead. Small, cosy half-truths might seem harmless enough to begin with, but where will they ultimately lead…?

‘Put on the Lord Jesus Christ,
and make no provision for the flesh…’
Romans 13:14, THE BIBLE

TO BE CONTINUED - NEXT BLOG:
THE CONSEQUENCE OF COMPROMISE
Posted by Eunice Wilkie at 04:01