WHEN YOU LEAST EXPECT IT

Remember back to your earliest school days?

When you’re small, the things around you seem much bigger. If I return to my first school, which my nephews now attend, the place seems far smaller than my memory would allow. It’s merely a quaint, brick, village school off a narrow, leafy lane. It has a compact playground and one particularly pleasant shady tree which isn’t half as massive as I first recall. There used to be two parts to the school. The classrooms in the old brick buildings were quiet and cool. The windows were long and narrow and all too high up to see out even if the glass had been clear and not frosted. In the other part of the school, the pre-fabricated hut classrooms – now all gone – were different. They were squat, low-lying, rectangular, and stifling in the summer heat. There was a particular scent to them – the one which is peculiar to schools and probably emanates from lots of stationery and books and (I think) glue – although I’m not entirely sure why the latter. But the smell was strongest in the pre-fab classrooms. The walls were paper-thin, and it echoed when you walked around the room. There was the background murmur of the class next door. You could hear birds through the open windows – I particularly remember the distinctive coo of pigeons. And there was the buzz of flies and bees, and even lawnmowers as villagers made the most of the sunshine… which never seemed to end. I suppose summers were as rainy – or unpredictable – then as now, but I only remember days of sunshine.

This is where I picture Jack Merryweather going to school that ordinary hot, summer’s day before the school holidays commenced.
Just another routine day, when he’d far rather be helping his grandfather on the farm with the harvest – but instead, as always, he’s sent to school. And nothing exciting ever happens there. Does it…?

‘It was day-dreamy kind of weather in the hot, stuffy classroom…’

It’s pretty tiresome to Jack as he works his way through his exercise book. He’s briefly tempted to try and get excluded from class and get sent outside. At least he could sit on the grass or throw stones against the wall. If he throws the paper pellet he has just made at Marigold Goody, she’ll be sure to tell…but Mrs Bubble, the teacher, appears to know precisely what he’s thinking.


‘“It’s nearly lunchtime, Jack,” she said. “I don’t suppose you would enjoy spending it indoors, would you?”
Mrs Bubble had a curious way of asking very obvious questions.
“No,” said Jack, trying to squash his paper pellet beneath his hand. “No, I wouldn’t.”
“I rather thought not,” said Mrs Bubble.
Mrs Bubble always knew the answer to her obvious questions. Jack didn’t know why she asked them at all…’

‘Jack was walking thoughtfully down the path to the school playing fields when he was interrupted by a shout from a big boy called Timmy Trial…
“Merrywhatsit!” shouted Timmy. “Come here!”
Jack, who could be surprisingly courageous even when he trembled inside, pretended he couldn’t hear Timmy. He wanted to be invisible and go to the secret gap in the hedge to see if Grandad was combining close to the big sheds. He might take his friend Alfie with him, but he did not want Timmy…’ 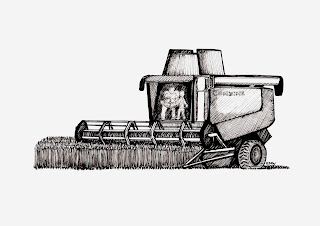 But on this most ordinary and uninspiring of days, things take an unexpected turn. Jack flees from Timmy, and, against the rules, exits the school grounds through the hedge into fields, hoping to hide in safety. But there is nowhere to hide from the furiously pursuing Timmy; not even Jack’s grandfather’s familiar farm sheds close by offer sanctuary. Then something quite unexpected happens, and despite Jack’s penchant for adventures, nothing has quite prepared him for this.

I don’t know if you enjoy the thought of an unexpected adventure in the mundane routine of life. These days I think it would destroy my carefully arranged schedule to be thrown into another world without a moment’s notice (although I make up for it by allowing time to stand still in the ‘real’ world!). But it was important, in the first book of the series, to emphasis the very ordinary nature of Jack and his surroundings. Jack, a normal schoolboy who is a Christian, is about to embark on an adventure with an unwelcome companion – a belligerent bully who holds very different opinions on Bible Truth. His courage, patience, perseverance, and faith in God will be tested. Is he ready for the challenge? I wonder if I would be prepared to face this particular adventure…

And yet, extraordinary, unexpected things can happen to any one of us, as Jack is about to find out…

Enjoy this 1 minute movie summary of THE RESCUE OF TIMMY TRIAL...but be warned, it might make you jump…☺

TO BE CONTINUED – NEXT BLOG: UNEXPECTED DILEMMA