I suppose we’ve all been in situations where things take an unexpected turn. Sometimes we land ourselves in unusual circumstances through impulse or carelessness or even daring. Remember the scene from ‘The Magician’s Nephew’ by C. S. Lewis, when the children are faced with a fascinating dilemma in the form of a rhyme…

‘Make your choice adventurous Stranger;
Strike the bell and bide the danger,
Or wonder, till it drives you mad,
What would have followed if you had.

“No fear!” said Polly. “We don’t want any danger.”
“Oh but don’t you see it’s no good!” said Digory. “We can’t get out of it now. We shall always be wondering what else would have happened if we had struck the bell…”’

Of course, not all small decisions end with such drastic and far-reaching consequences as they did for Polly and Digory – who inadvertently unleashed great evil on an innocent world (if you’ve never read the book I recommend it!). But small steps can have great consequences. How often has a ‘normal’ life decision – a change in location, job, relationship, lifestyle, hobby – led us in a direction we never would have expected? The people we meet, the interests we develop, the habits we acquire, the lifestyle we manage – can all hinge on just one final step; on that possibly unexpected, perhaps even routine, dilemma, that didn’t seem like such a big deal at the time. ‘Strike the bell…’ and there’s no turning back.

What about before you reach the bell?
So often it’s the initial choices in life that influence, even determine, the final outcome. What if Polly and Digory had never reached that strange, damaged ‘deplorable world’, and never subsequently seen that golden bell and hammer that led to their dilemma? Actually, if that had been the case, ‘The Lion, the Witch, and the Wardrobe’ need never have been written. And what if our two schoolboys, Jack Merryweather and Timmy Trial, had never exited school grounds and entered forbidden territory? On their own, they might have turned back and the adventure ended with just a simple breach of school rules. But together, they dare each other to go on.

Life changing discoveries can start in the most innocuous ways.
Jack and Timmy’s life changing adventure starts when, despite the fact that they know something isn’t quite right, they enter a farm shed which belongs to Jack’s grandfather. Inside, it doesn’t contain farm materials, but looks strangely like the reception office at their school. Then they begin to spot small differences, like the handwritten note which simply says…

Events become more peculiar when they meet the Supervisor of whatever establishment they have entered. He doesn’t seem to belong to the real world – the world of rural England and the simplicity of village life – at all! 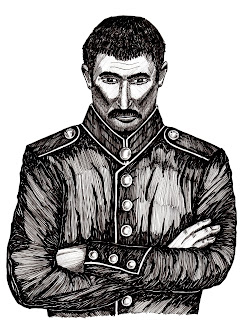 ‘“We were at Grandad’s sheds,” added Jack.
The Supervisor…considered this. “I see,” he said at last. “There are many ways to get to Aletheia from other countries and towns. I’ve never heard of Grandad’s Sheds, but that’s interesting, very interesting.”
Jack wasn’t sure how to explain that his own country wasn’t called Grandad’s Sheds. It was a surprise to him that this formidable man, who appeared to be in his right mind, was talking to them as if they had entered another place altogether: a place called Aletheia…’

The changes now come thick and fast and affect the two boys in strikingly different ways. Jack is a Christian, and he is comforted by the fact that the things around him seem to be related to the Bible; Timmy is not a Christian and he wants nothing more of this strange place which will challenge his perception of Bible Truth. In vain Timmy rushes desperately for the same door through which they entered…

‘…and flung it open with a triumphant cry.
But the farm sheds were gone; there was a strange road ahead; an unknown city loomed large close by; and Timmy tumbled down the steps into a world he did not know…’

Jack and Timmy enter another world. They would not have chosen to be there together: Timmy despises and bullies Jack; Jack heartily dislikes Timmy. But they have entered the mysteries of Aletheia, and, like it or not, they must face the Bible Truth that is presented to them there.

I think most of us have ‘what if…?’ moments, and ‘what if…?’ regrets.
We can’t change the past, rewind the clock, erase events and re-do it all differently. But we can choose the next step, change course, re-set the compass and plot new coordinates. We can face the next ‘strike the bell’ dilemma – and choose differently. We can change direction entirely, most fundamentally in our relationship with our Creator, God. As the adventure progresses, we will learn how crucial this is, but in the meantime we’ll leave Jack Merryweather pondering what this strange new land might have in store…

‘Jack picked up a book… entitled ‘Beware of Snares’ and on the front there was a scary picture, of a shadowy creature with cold, glittering eyes. He thought of the note pinned to the glass in reception about ‘dealing with Snares’. He looked closely at the picture. Could it really be that there were real, live scary creatures in Aletheia that weren’t in England and the rest of the world? He wished he’d paid more attention when they did a project about Africa at school. He had written an adventure about being chased by lions and tigers, but had Mrs Bubble told them anything about Snares?...’

“Adventures are never fun while you're having them.”
C. S. Lewis, The Voyage of the Dawn Treader

TO BE CONTINUED – NEXT BLOG: LITERAL TRUTH